Being the first of the kind in the Baltic States, Biometaan OÜ produces up to 1.5 million normal cubic metres of biomethane in Viljandi County. The most modern biomethane plant in Europe is located in Koksvere Village, Põhja-Sakala Rural Municipality, in the immediate vicinity of Mangeni Farm with 1,700 dairy cows. One normal cubic metre of biomethane contains about the same amount of energy as one litre of liquid fuel. The source of energy is methane (CH4) which is equal to natural gas as a fuel. The raw material used to produce biomethane in Koksvere Village, Kõo Rural Municipality, is the slurry, silage and manure from the dairy cows of the farms of Mangeni and Õnne. The company uses 81,000 tons of slurry, 5,000 tons of solid manure, and 5,000 tons of silage per year.

The complex of the biomethane plant comprises a wood chip based heating plant and a silo, equipment used to feed silage and slurry, two fermentation plants, biogas purification equipment, a gas station, a shelter for compressed biomethane cylinders, a control building, a pumping station, a garage with thermal insulation, and a fermentation residues separation point. 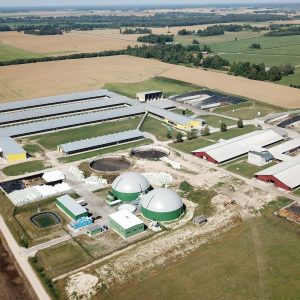